I mean, even if a kicker was the cause. That's the entire point. The track gets rough and you have to learn it. Listen to any post-race interview during the SX season. The riders IRL rarely say, track was so fun! It's always, track was gnarly and got beat, so rutted/rough etc.

Exactly aeffertz. There's no way SX riders ride the track with the same technique late in the race as they do early in the race. Similar traits happen in sim.

I thought the track was so sick! I was just pumped to make the night show. Couldn't have cared less that I didn't make the main. Was just pumped to be out there again. I saw a lot of people complain about the 1st whoop section, but they weren't bad if you had a drive through them. Just wasn't a good run up to them to get on top, but that's how the track is suppose to be. +1 to rF for another great track!

ridden for an hour, berms and whoops are definitely weird. berms get good with erode i think but... one line helps but im not about that in the first place.

I would have liked to see a start of an inside rut after the first triple so an inside line can form in the whoops since the rut made it really one lined, but other than that I enjoyed the tracks technical whoops and hard-to-hit triple ins this week.

What I'm confused about is some of the best erode rounds had steep bowl turns, and or starter ruts lower in the turn. 2018 Houston, 2018 A2, first 2 to come off the top of my head. And that was with under developed erode settings. I could only imagine how they would work now. These turns remind me of 2018 east coast. But those didn't work, and now we're back to a similar style. Why?

We have the information on what works and what doesn't, but we aren't using it.

Also, SX triples and timing gates should have a bit more forgiveness to them. You're having the top 1% in the game struggling with clearing SX triples consistently. In real life, you have more sense of speed/trajectory so making them realistic(ish) isn't fair imo. Though the timing gate across the start after the finish should be fixed since there's a new object pack out, I don't see why there should be a timing gate there and how unforgiving it is. I get the realism factor for the broadcast, you dont want dudes mobbing through mechanic bales but if thats the reason, throw them puppies on the opposite side.
And wasn't it a standard for timing gates to be place on the lips of jumps rather than in between rhythms? Here's some examples I made.
Official: 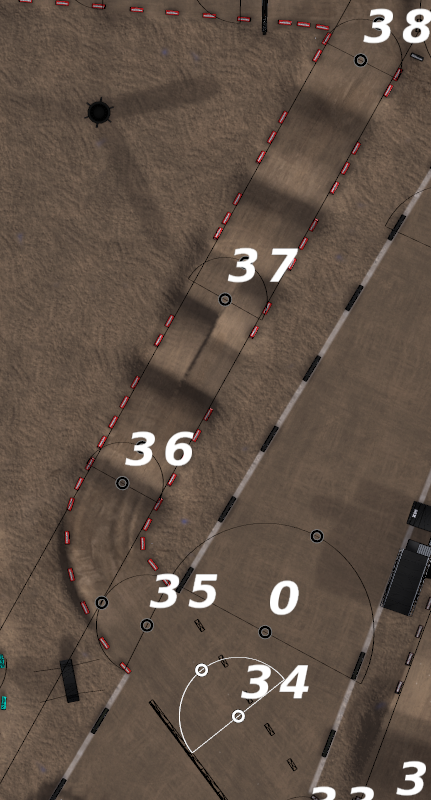 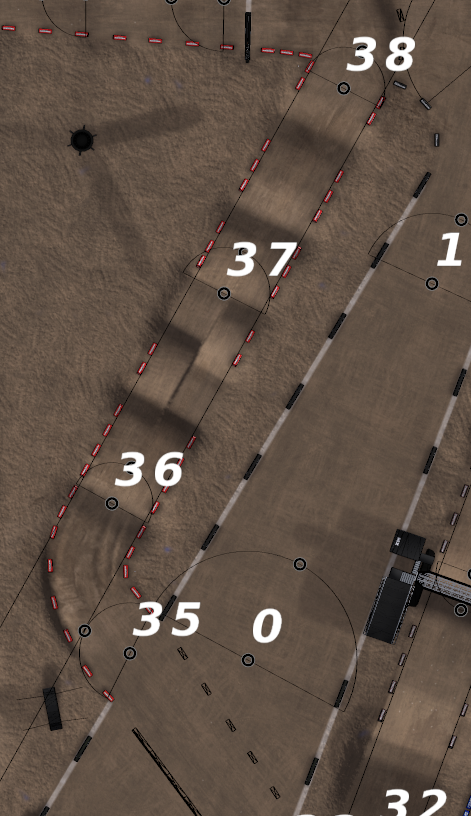 In the first example looking back it 16 probably isn't needed as it is a bit excessive. If I could do it again i'd do it like this.

But as for supercross triples and gates I don't think it gets more forgiving that what I already have. Plenty of room after the landing before next gate. In your example you actually move the gate up the face making it less forgiving for people that collide and possibly get ejected off the side the of the face.

The second example I believe there should always be a gate there. In the future I will make it a little bit more forgiving but without one there at all everyone swings wide like you said and not only does it make the racing look bad but it would allow people to swing wide and have way more speed coming into that section that intended.

For having gates at tops of jumps I never thought it really made a difference as there is literally only a couple feet between where I put them and the tops of jumps and the reason once again I don't put them at the very top is the same as SX triples. Collisions in sim are fucked sometimes and you get shot off the side of a jump and miss the very top. Also it allows me to align them with a bale which is nice.

Nailed it. This is all a lot of people are asking for. We know you guys are so close and it’s exciting!
Return of Flower Power - 2020
Top

Atom6246 wrote:What I'm confused about is some of the best erode rounds had steep bowl turns, and or starter ruts lower in the turn. 2018 Houston, 2018 A2, first 2 to come off the top of my head.

I don't see why starter ruts wouldn't work! Should atleast give it a try again and see how it goes. Really enjoying erode but damm it would be nice to have atleast 2 ruts in a corner
Top

Whoever placed them timing gate on the finish, nice fail. Rolled next to the hay bale not even clipping the poles and didn’t count as crossing the finish even though I did. Didn’t transfer due to that so that’s kinda cool

I just watched my main and these are the only times I went off-track. Almost 5 seconds in cuts

Yeah gate 16 is completely irrelevant. I would help with Gates if asked as I did gates for a while in mx and I feel like I’m fairly good with them. You want as few as possible without making it possible to gain time. And Im hella good with finding possible cuts to gain time (Obviously how do you think I won a race lol jk) but seriously. So many of the gates in rF for the last 2 years have been trash outdoors mostly but you shouldn’t be seeing so many cuts in a pro SX race.

Fro77 wrote:You didn't lean back off the face

technically pulling up by leaning forward. thus fixed endo.
if I’m still complaining on the internet over the age of 30 someone ban me

Will the pro and am racing be in a triple crown format this weekend?
Top
Post Reply
264 posts

Users browsing this forum: No registered users and 6 guests